The explosive nature of "change management" can be well illustrated with the metaphor of open-heart surgery. It is therefore hardly surprising that bosses and entire management teams show signs of insecurity and excessive demands in view of the dimension of the management tasks in change processes, because they have to manage the "change" in parallel to the ongoing day-to-day business.

I like to pick out the "Change House" model from the toolbox of "Change Management" because it meets the need of managers for usable solutions. The user understands the management tool right away. It is simply constructed, intuitive, and therefore does not require a time-consuming familiarization process.

The model's messages to managers

The four rooms shown in the figure map the emotional stages people typically experience during a change. The rooms are progressed through in sequence, starting from the upper left "Room of Complacency" through the "Rooms of Denial" and "Confusion" to ultimately reach the actual targeted "Room of Renewal." The small annexes with the significant names "Sun Balcony", "Denial Dungeon", "Paralysis Hole" and the "Wrong Exit", show possible extreme manifestations of people's behavior in the change process.

The first message to executives is that companies initiating change must take the detour through the first three rooms. Only then will their change process reach renewal. But: not all companies are fast enough in doing so. Successful companies move swiftly through the three rooms and quickly arrive at renewal. Less successful companies take a comparatively long time. With poor leadership, change processes can also fail completely. The room of renewal is never reached because the change "dies" in one of the small rooms.

The second message is that there is a "natural friction potential", i.e. the inhibiting factors shown are not avoidable even with the best "change management". But professional managers can help minimize friction to the unavoidable level. 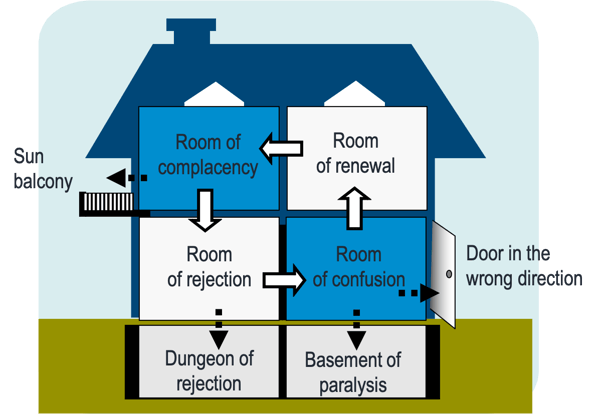 Message three: Some managers, with unprofessional leadership, create a level of friction that is well above the natural level. The typical phenomena of "change processes" are evident. Employees sometimes comment sarcastically on management behavior, either openly or behind closed doors, and adjust their behavior accordingly. The heating up of the rumor mill and irritated remarks by employees who, for example, talk about "black holes" or "another free-flying phase" characterize the discordant and seemingly unavoidable background music of poorly managed change processes.

What should managers be prepared for in the "change process"?

People who are in the room of complacency are satisfied with the current situation and see no reason for the need for change. They pay little attention to changes in the outside world because the general feeling that everything is going well and right is widespread in the company. "Our business is going well after all" and "We've been doing it this way for years, why make this change all of a sudden?" are typical statements. If too many organizational members cavort on the sunny balcony, then the time for change may even be missed altogether.

In the room of denial, people show skepticism, inner rejection, and even open resistance to the change. "Does it have to be like this?", "Not with me!" or "Let the others start with the change first" are identifying characteristics for the leader. Irritated or aggressive behavior on the part of employees is frequently observed.

Statements such as "Everyone is saying something different" or "No one 'up there' can tell me where things are going! Employees lose their bearings, are frustrated or angry.

In these critical stages, which precede the desired renewal, unprofessional leadership behavior has fatal effects because it adds to the already unavoidable friction. Employees are driven into a dungeon of denial, insecure employees freeze in a paralysis hole. If leadership chaos and lack of direction exceed a certain level, employees - usually the best ones - leave the company through the wrong exit.

Practitioners blessed with relevant change experience like to add their own creations to the model. They speak of the room of despair, or of the fireplace in which plans, agreements and promises made by managers go up in smoke.

What are the concrete benefits of working with the model?

The "Change House" supports the forecast: "What will happen in the change process?". "What will happen to me and the employees?". Using the tool enables initiators of "change" and their leadership teams to become jointly aware of the leadership requirements in the change process and to develop a unified framework of thinking. The alignment of leadership actions in terms of "If ... then ... Relationships" is prepared. Example: "If we don't get communication about the "change process" coordinated, then we send our employees to the room of denial, some even to the dungeon of denial."

On the origins of the "change house" model

Paul Kirkbride, owner of the "Change House" in Reading, UK, which existed from 1989 - 2002, developed Janssen's approach further with colleagues from Ashridge Business School under the name "The Change House" for application in management. They shifted the focus from the individual to the interaction of employees, managers and the organization as a whole. In their work, they expand the four rooms to include their extreme manifestations.

With its diagnostic function, it helps supervisors get a differentiated picture of the situation at hand: "Which employee is in which room?" "Which teams are already in disarray, which are still in complacency?" The supervisor better understands the situation of his employees. Based on this understanding, he can tailor his expectations to fit the situation his employees are currently in. By managing expectations realistically, he can prevent employees from being overwhelmed and can adapt his leadership actions to the situation. The model thus provides the supervisor with valuable information that he can take into account when selecting specific leadership measures to be adapted to the situation.

Finally, the model fulfills the function of decision support: "Which leadership tool helps when I encounter complacency, denial, or confusion?" In this way, it shows leaders ways to effectively initiate and drive change through constructive and appreciative collaboration with employees, and ultimately increase the change's chances of success.

By consistently following the model, the leader is given the key to effectively fulfilling his or her leadership responsibilities. He develops a good sense for measures with which he can best support and accompany his employees before, during and after the change.

Why is the tool so attractive for managers?

- The user quickly gets to grips with the basic statements of the model because it obviously reflects the emotionality that arises in people during change so accurately that the manager finds himself directly involved in his leadership practice.

- The model helps to intuitively adjust to the expected psychological dynamics with their frictions in the change process. Understanding the model as a leadership tool does not require an elaborate learning process, because the user draws directly on his or her own experience.

- Because of its simple design, it enables leadership teams to quickly come to a common understanding of the challenges of a change process. It supports bosses in agreeing on well-coordinated measures for managing their employees. As a result, the model quickly meets with acceptance, which often falls by the wayside when theoretically based management concepts are applied in practice.