The “healthy organization” is a central concept at Reflect. In the latest two Notes we already refered to two components of that modern organizational concept: The “healthy strategy” and the “healthy culture”. In this issue of the Reflect Notes we continue our series about the healthy organization and dive into healthy structures. How is this component defined?
Upfront: There is no perfect solution. A comprehensive and systemic view is decisive. Structures must be brought into harmony with the strategy and the individual culture of a company. According to the well-known guiding principle “form follows function” (Greenough 1852) one could say: Structure follows strategy and culture. If strategy is the bridge to reaching a future goal, then culture is comparable to the soul of the company. Structure then is the engine. Structures regulate procedures and tasks in an organization. Units are combined, roles created, hierarchies defined, power described. Structures can be organized in a central or (radically) decentralized way. They can be classic pyramids or modern networks. From a systemic point of view it is all about interactions between the single subsystems / units / subunits etc. 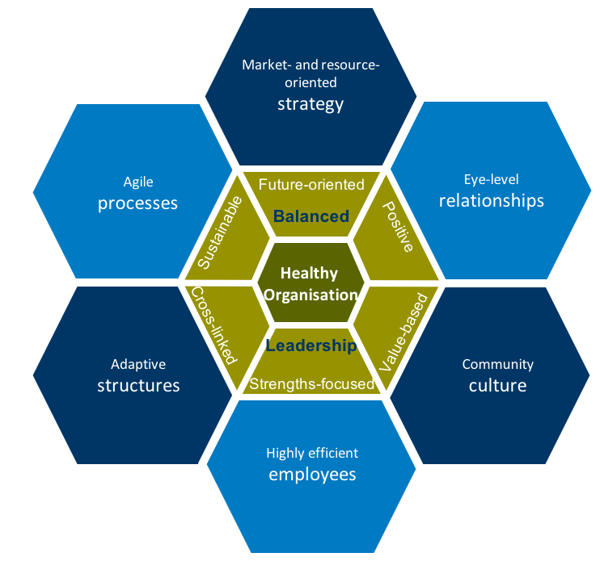 When are structures healthy?

To make it simple: When they support and foster the strategy and culture of the organization. That this is not so trivial at all was already shown by the early approaches of the Hawthorne studies which prepared economy for the uprising "Human relations movement" in organization theory as an opposite to “Taylorism” in the late 19th century. That's why typical structures are rather slim and decentralized and consist of a network with teams responsible for results. These teams have a high amount of freedom and are not controlled in every step they take. The whole organization is focused on the customer and not on hierarchy. This series will be continued in the following issues with the components “healthy processes”, “healthy relations” and “healthy people”.